Batteries – They need attention too

Almost all boats have at least one battery. It’s only use might be to start the engine but it still needs attention. The battery is one thing that, if it goes bad while you are out on the water, it can make it very difficult to get back to port. Now, I know, some engines can be started with a rope, but some engines need a battery to stay running. It just depends on the ignition system on the engine. Newer mid-size to large engines have to have a battery to stay running because the engine draws its power from the battery. If the battery is no good, then the engine is no good until the battery is charged or replaced and it is hard to do that while you are out on the water. There are not many battery shops out in the Gulf of Mexico.

Since the batteries are usually tucked away in places that they are not seen on a regular basis, they tend to be overlooked on a regular basis. These places can be a pain to look in to, much less, get access to. There are, however, things that you can do to make things a little less of a pain in the butt.

First, let’s talk about things that happen to batteries that can make them dwindle down to nothing but heavy plastic boxes holding lead and acid.

Sedimentation - Sedimentation is the excessive buildup of the above sulfation flakes and other foreign matter on the bottom of the battery potentially causing the plates to short with each other, again reducing the effectiveness of the battery.

Charging - Chargers are a good thing and a bad thing (if used improperly) in that you can slow charge a battery (the best thing to do) or you can charge a battery fast (not good). Typically you want to charge a battery at no more than 10% of the rated amperage of the battery. So, lets say you have a 100 amp hour battery, then you can charge it a 10 amps. Some chargers have the ability to charge much higher than that which is fine but be careful using it because you could actually boil the fluids inside the battery releasing flammable gasses into your boat and causing sulfation

Wingnuts - Don’t use them. If you have them on your battery, replace them with a stainless steel nut. You can’t really get the torque that you need on a wingnut unless you use pliers. If that is the case, why not use a nut and wrench? A lot of starting issues are caused by bad connections at the battery. 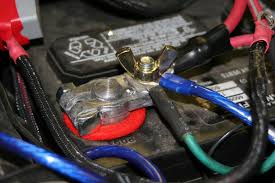 Corrosion - Most people have seen corrosion on the posts of a battery. It usually looks like a white powder build up. This is not what you want to see on a battery and should be cleaned sooner rather than later.

All engines have manuals, and those manuals will tell you the battery specifications that the engine requires, cold cranking amps, marine cranking amps and reserve capacity. It is acceptable to use that spec battery or higher, but do not go lower to save a buck. The battery will not last as long and you will end up spending more money in the long run replacing the battery more often. Also ensure that the battery is a marine battery as they are built differently from car batteries to be able to take the stresses of the marine environment better.

Now for starting, deep cycle and dual purpose batteries. Starting batteries are for just that, starting an engine. They can however be used to power a limited amount of accessories on a boat. Like, navigation lights and a bilge pump. If you have a lot of accessories, like VHF, GPS, RADAR, trolling motor, sonar, stereo, stereo amp, live well pumps, lights, electric reels or down riggers, raw and/or fresh water wash down pumps, you will want a deep cycle battery (or more) in addition to your starting battery. These batteries are specifically designed to do certain things. A starting battery is designed to put out high amperage over a short amount of time, whereas a deep cycle battery is designed to put out a small amount of amperage over a long period of time. Now for the dual purpose battery, in this industry, it is generally not recommended for use. It is a hybrid of both, and therefore half as good as either. Not wise for a boat.

Testing a battery should be done on a regular basis. Some people refer to it as a load test. It will tell you how effective your battery is and can indicate some problems internal to the battery.

All of this talk about batteries is good, but there is one thing that needs to be talked about that helps the battery when you are out on your boat, the charging system on your boat. If your engine is not charging your battery, you will have a short day on the water that will most likely end in a tow. Some of the newer engines like Yamaha and Suzuki to name a couple, will not start unless they have nine volts or more. Your battery might show 12 volts when you are not cranking, but as soon as you turn that key to start, the starter motor drops that voltage significantly, potentially below the required voltage needed to start your engine.

Due Course Marine Services can assist you with any battery or charging system needs. Just give us a call.

Enjoy your day, and as always,

Stay safe on the water.